Elemental Heroes were always popular. Being one of the largest archetypes to have been created in Yugioh, hero decks always looked to swarm the field with their fusion monsters. But with the banning of elemental hero stratos in the TCG (limiting in the OCG) the heroes seemed to have disappeared forever. This is clearly not the case.

With the January release of the Hero Strikes Structure Deck a new era in the history of elemental heroes has begun. The new Masked Heroes have proved to be some of the most powerful fusions to hit the game, and each one of them has special effects that virtually win you duels. Support released has compelled many, (including me) to build this new archetype. In a bid to popularize the hero threat, I present to you a quick crash course on each of the relevant masked heroes, along with some focus on the new support for them.

The bold text has the name and similarity.

Masked Hero Dark Law is something which I’d been tracking forever prior to its release.Considering the sheer dominance and power levels of the newest meta, dark law is the perfect answer. Dropping this card in a duel can effectively win you a game. Its the perfect floodgate. In a world where meta decks burn the rest, the graveyard is something which even rogue decks cant go without. Meta decks like burning abyss live off the graveyard. Dark law banishes everything, and much more. This itself is good enough to win you games, but furthermore, it can punish searching. It effectively makes your opponent lose cards when searching, giving you card advantage. Dropping this card means game over against the cat majority of meta and rogue. 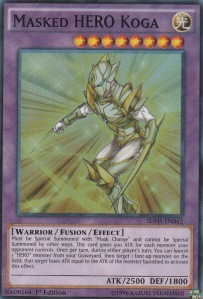 Usually beatsticks have enormous attack. Koga doesnt need it. Apart from being the single greatest answer to apo qliphort towers that heroes have, koga can tip games in your favor easily. Firstly, it can punish a player who swarms mid 2500 attack monsters. Qli, chaos dragons and variants, and even shaddolls can get hurt by this card. Next, it can cause permanent decreases to your opposing monster’s attack. This is also a quick effect. Usually, a few turns should be enough to run over your opponent while koga is on the field, with OTKs being a genuine possibility. In terms of grind games, Koga is always the man of the match. 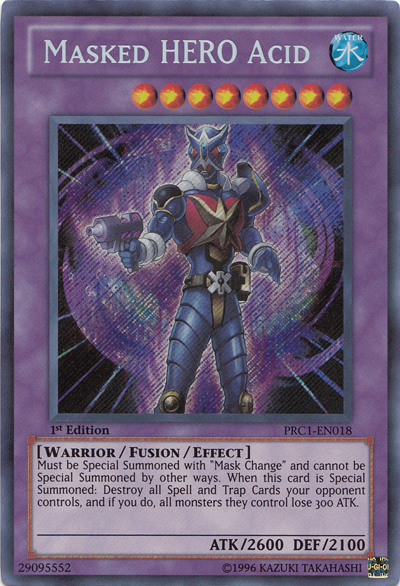 Yep, the name says it all. Masked hero acid destroys all spells and traps on your opponent’s side of the field. Any deck that depends heavily on backrow, and of course, qliphorts, get hit really badly by acid. This card also wins you games, as it can deal too much destruction for any player. As a quick bonus, it also reduces all your opponent’s monsters attack by 300 points, effectively giving it a pretty decent 2900 attack.

This hero is surely less impressive than his colleagues. But his effect churns out ridiculous combos. If dian destroys your opponents monster, he can bring out an elemental hero shadow mist, which can attack during the battle phase, and search your mask change, which can churn out a dark law, which means more damage. Dealing 8000 damage in a turn becomes all too easy with this card.

Divine Wind isn’t as good as the other superstars either, but his presence on the field usually helps you consolidate your position. His effect prevents your oppponent from going too crazy with the attacks, and provides an easy way to gain card advantage. Furthermore, he can’t  be destroyed by battle. A good card indeed, and it can be slightly underrated.

Not yet out in the TCG, but its worth the wait. Masked Hero Anki is the 8 star version of dark law, and its effect lets you search another mask change. What does this mean? Masked heroes might as well become the most feared OTK deck, taking the mantle from Necloths and Qliphorts themselves. This card can prompt an easy 5000 damage on its own. It can also act as a good finisher, in times of packed fields. It’s a backup for dark law too as its dark attribute.

So far, there’s a pretty common trend which can be seen. Macro cosmos, thunder king Rai oh and goyo guardian are limited. Harpies feather duster is banned. But all these heroes have effects which nearly mirror those cards. Every single masked hero can prove to be a darting presence on the field, ushering in the age of floodgates over card advantage. A lot of the masked heroes turn the duel into a classic beatdown show too. Such is their effect.

The masked heroes haven’t started topping all over the United States and Europe yet, but with the impending release of elemental hero blazeman the future looks bright. One only needs to look at Japanese results to conclude that. Heroes are back, stronger than ever.

Perhaps the most exciting part about this masked hero budget deck is that, while its far cheaper than meta decks, it’s best matchups are the meta decks too. Reminiscent of evilswarm, but better.