The highly anticipated Madrid Derby came to an end… the first leg that is. In a largely stop-start match, it was the reigning Champions League holders that seemed to outclass their noisy neighbors. Real dominated 80% of the match. Ironically, they didn’t score. Nevertheless, the outcome of the second leg is open to interpretation, and one could argue that either side holds an advantage entering it.

Atletico Madrid had Jan Oblak in place of Miguel Angel Moya in goal, while Mario Suarez and Joao Miranda started ahead of Tiago and Jose Gimenez respectively. 4-4-2 was their shape.

Real Madrid lined up with the expected formation. Pepe wasn’t fit enough to play though, and was replaced by youngster Varane. James also made the starting lineup ahead of starlet Isco.

The build up to the match had been intense, and was interestingly picked as the tie of the week ahead of Paris’ encounter with Barcelona. Real’s form in recent matches suggested a good showing and that was exactly what happened. The first half in particular was dominated by the visitors as Jan Oblak justified his start.

Atletico’s strategy was to weather the storm and go ahead through set pieces, while Real Madrid attempted to assert themselves with quick, direct attacks.

Much of the build up to the match was revolving around a potential repeat of the previous meeting, where Atletico exploited the wings, particularly Real’s left side, to much success. With Koke and Arda Turan (2 of Atletico’s best creators) loading up the wings, one would expect much of the same, but much of Real’s ball recovery came through the wings.

James Rodriguez and Marcelo once again teamed up to great success, and stifled the creativity of Juanfran in particular. One only needs to compare Juanfran’s performances from the 4-0 derby and this match to see the difference. Juanfran was tamed. 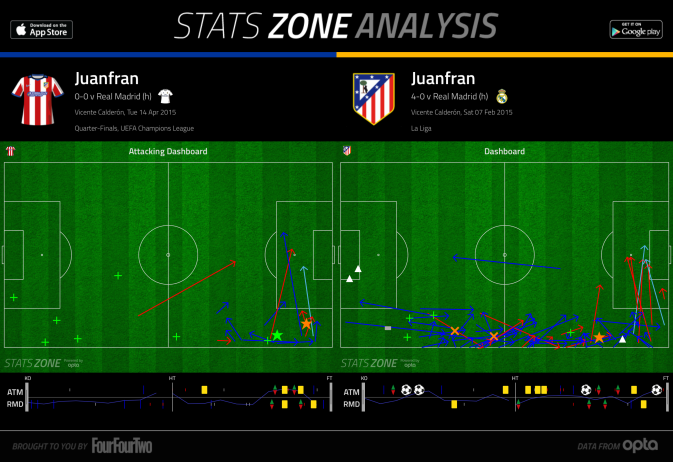 Credit to Danny Carvajal and Gareth Bale too, their successful partnership helped keep Koke quiet for the entire match, and even resulted in his substitution towards the end.

While previous encounters between these sides have seen Real Madrid enjoy slow time on the ball, the visitors tended to play the ball with far more urgency. Karim Benzema and Cristiano Ronaldo had wonderful chances from counter-attacks, only to see Joao Miranda thwart them. While Real Madrid tend to pile on crosses and long balls in the derbies nowadays, this match was notable for the lack of long balls. The swift attacking substituted for it.

Jan Oblat’s performance merited a man of the match trophy, forget ball. Key saves from Gareth Bale (twice), Cristiano Ronaldo (twice), and James Rodriguez (twice) proved to be decisive. All 8 shots on target were saved. The few crosses that threatened were caught with ease too. Oblak justified his manager’s trust in him. 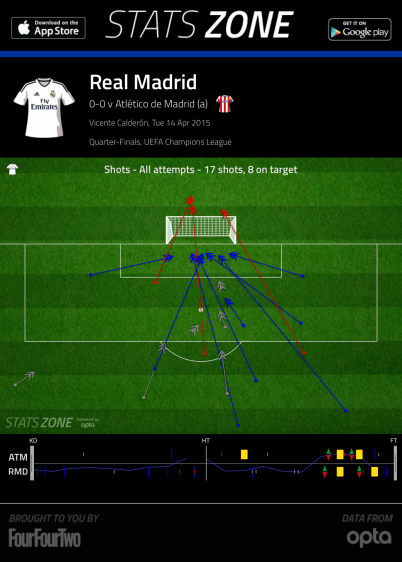 There should be no doubt that Diego Godin is the best center back in the world. Its a fact, and the sad reality is that the upper echelons of the footballing world rarely acknowledges these ‘anomalies.’ But today, Joao Miranda proved his worth to Diego Simeone too. His defending, and man marking of Cristiano Ronaldo was flawless. Atletico will be thankful that he, and Diego Godin for that matter, are (probably) fit and available for the away leg. 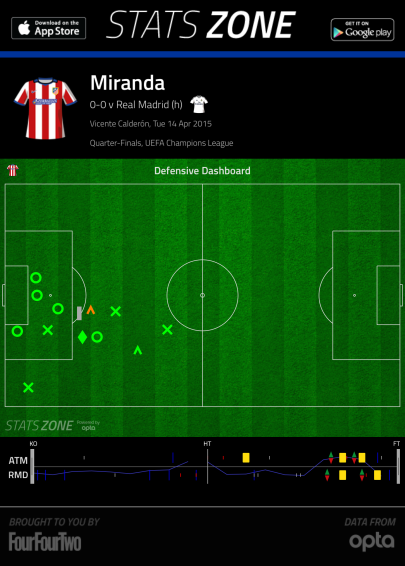 Sadly for them, they didn’t ‘strike’ back. As the match wore on, Real didn’t dominate as they did in the first half. Not that Atletico did either. But Mario Mandzukic in particular try to leave his mark on the match- he fought, squabbled and heckled the Madrid defense.

Real Madrid’s defense was back to the resilient defense displayed in the same stages of the competition last year, as they managed to keep a clean sheet at the home of a European superpower. 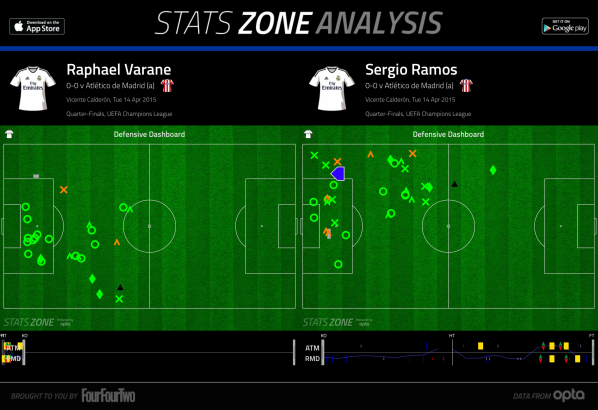 Atletico Take A While to Tighten the Hatchets

The fourth minute chance nearly converted by Bale was the major chance in a nervous opening period for the home side. Their first half performance was no doubt a leaky one, and it took them 45 minutes to start defending like the team that dazzled the footballing world last year. Trifling it seems. A similar half in the Bernabeu could bring hopes of Berlin crashing down. Credit to them for a superior second half though.

In the end Real Madrid played a more productive game, their performance successfully prevented Atletico from taking a lead or even scoring at the Calderon. The match from a tactical perspective was not that interesting, and will be seen as Real’s lost opportunity.

For a Real fan, the match is now a one match playoff where a scoring draw is defeat. Not too bad a result, it could’ve been a lot worse too (Ancelotti). A similar performance should see them win, as Atletico are chasing the game. Its also the second time in 5 match days that they’ve dominated at the home of a major rival.

For an Atletico fan a scoring draw or victory seems possible, especially if they don’t make the same mistakes that nearly cost them at home. Taming Juanfran and Antoine Griezmann for another match isn’t plausible, forget happening. They will feel their favorites.

Either way, this not-so-revolutionary match has still left us with a cracker of a return leg. Watch this space for that analysis.