After consecutive defeats to Spanish giants (and eventual winners) in the Champions League semi-finals, Bayern Munich needed a decisive summer to get back on track. The past 2 summers had seen big names enter (Mario Gotze, Robert Lewandowski, Medhi Benatia, Thiago Alcantera and Xabi Alonso) to bolster the squad, but also seen other important players depart (Toni Kroos, Mario Mandzukic, Xherdan Shaqiri). Before I begin, an analysis of Bayern’s past transfer activity is necessary.

Mario Gotze has struggled to find a role at Bayern Munich

An examination of Bayern’s transfer business since Pep Guardiola’s tenure began is revealing: 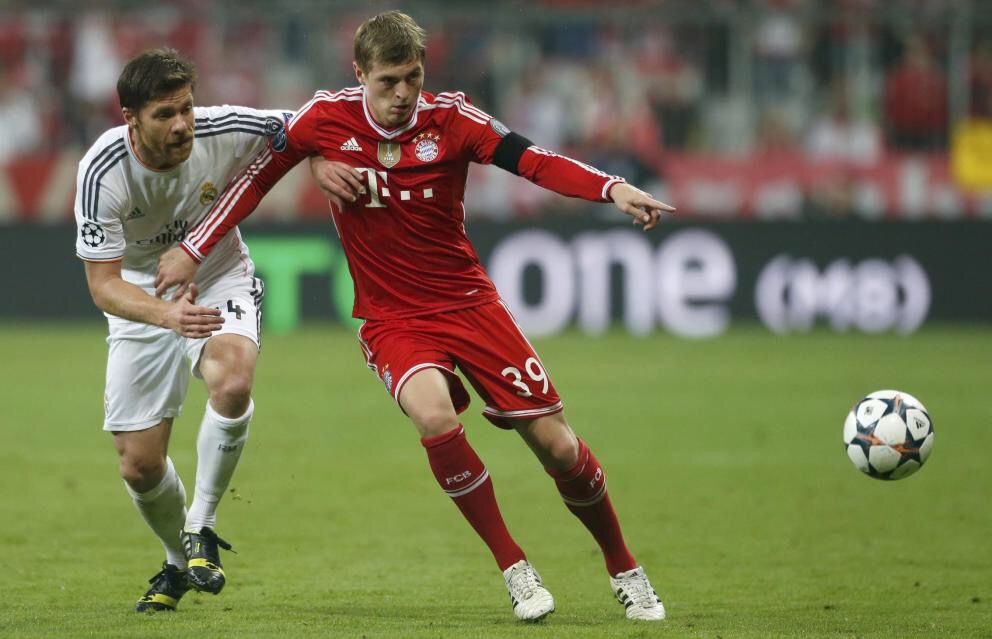 Real Madrid swapped Toni Kroos for Xabi Alonso, and only paid 12 million pounds in the process

Whilst slightly exaggerated, the problems this Bayern side has had over the past 2 seasons is a direct result of their actions. The priorities all lay in deposing Borussia Dortmund to ensure sustained dominance on the domestic circuit. Combine all those problems with a mini injury crisis, and everything makes sense. The Bavarians invited their current situation.

While the defeats to Real Madrid exposed Pep Guardiola’s tactical weaknesses, the defeats to Barcelona exposed Bayern Munich’s sporting weaknesses as a whole. Bayern’s transfer strategy left them with a montonous midfield and little to no quality replacements.

Look at Bayern’s starting XI issues in that game: Robben and Ribery were out injured, while a replacement in Xherdan Shaqiri had been sold. Robert Lewandowski played- albeit with a face mask and was half injured. The midfield consisted of Alonso, Schweinsteiger, Lahm and Thiago. 3 World Cup winners and all great players in their own right, yes. But all were tacklers, passers and playmakers. None of them had speed or intensity when pressing. None of them could go on a slalom through midfield or harry Barcelona’s midfielders single-handedly, let alone collectively. With all due respect, one can’t depend on Juan Bernat (a left back) to be a side’s major attacking threat against Barcelona. In essence, Bayern’s issues left them playing 4 anchors and/or deep lying playmakers in midfield. Tactically, it failed. It comes as no surprise that when Mitchell Weiser was on the pitch, Bayern was at its best.

Back to the major issue. Long story short, Bayern needed a good summer to refresh their charges. Which is what they got.

For a side lacking bite and a certain viciousness in midfield (or anywhere for that matter), Arturo Vidal is the perfect remedy. He is physical. He is energetic. He is strong. Everything this Bayern machine needs in the engine room is addressed by this man.

Vidal is essentially an upgrade on Bastian Schweinsteiger. For Bayern Munich that is. Phillip Lahm, Thiago Alcantera and Xabi Alonso already share Schweinsteiger’s qualities. But Vidal’s are relatively unique. He can press with intensity, chop up tackles and has good pace to go with it. Defending against counter attacks will be easier, even more-so because of this man’s habit of getting booked. On the ball, Vidal can slalom a bit too. The flair which Vidal brings to this side will be important as the Champions League progresses.

Versatility is important in football. Extremely important when your playing under Pep Guardiola. The Catalan has fashioned this Bayern side on successful individuals, no doubt, but is looking to engineer multiple formations which work in game. Tactical blah-blah? More on the lines of extreme versatility. Against sides that do not use zonal marking (not Atletico Madrid) off the ball, being able to switch formations easily is of the utmost importance. Arturo Vidal is of the utmost importance. The Chilean is known to be able to play in nearly any position. Center forward? Check. Left back? Check. Goalkeeper? Maybe not. You never know. Vidal boasts a unique skill set individually, and can fit into nearly any system if given the right degree of freedom.

The third quality Vidal will bring to Munich is not in his hands. He could end up bringing the best out of Xabi Alonso.

Last season, when Alonso and Schweinsteiger played together, things didn’t work out. Bayern malfunctioned. The first half of the season saw Die Roten dominate with Alonso on the pitch. When Schweinsteiger returned for the second half of the season, things went awry. But even Guardiola had his limitations. Dropping the German or Spanish world cup winner was not a long term option. Despite months together, these two individuals didn’t click on the pitch. As a result, Bayern limped to the finish line with just a Bundesliga to show for their efforts.

With the German talisman plying his trade at Manchester United, Alonso will find it easier to succeed on the pitch. But could these two bring the best out of eachother on the pitch? The answer to that is probably yes.

For those who paid close attention, Vidal’s role at Bayern Munich could mirror (somewhat) Angel Di Maria’s at Real Madrid 2 seasons ago. Yes, the same side that won La Decima. Energy, work rate, intensity. They share it all. Its worth mentioning that Di Maria also played alongside Xabi Alonso that season. One a pass master, another an energetic box to box player. If Guardiola can forge a similar partnership, then the Chilean will make up for his price tag.

All in all, Vidal was a great signing. A necessary one.

When was the last time Franck Ribery was fit? He missed the World Cup, and the vast majority of last season. His injury problems have been carried forward into this season. The Frenchman could return from injury, only to pick up another niggle like in the past. Quite clearly, Bayern cannot depend on his fitness. Which is why they signed Douglas Costa.

Douglas Costa is a different type of predator. A Brazilian one. Signed from Shakhtar, Costa carries immense pace, strength and enthusiasm in his game. While he is suited to being a number 10, Costa showed that he could play on the left. To be specific, Ribery’s role and more.

Initially doubted, and even deemed to be unnecessary by some, this predator vanquished all criticism with a series of strong displays. Against Real Madrid and Wolfsburg, that too. The Brazilian tormented left backs throughout preseason, and increasingly looks like a major coup for FC Hollywood. A brilliant signing.

While Costa’s major qualities were already present at the club before his signing, there are 2 major reasons why he is necessary for the German champions. The first, as mentioned before, is to bring the flair that Ribery did (if he was fit) to the pitch. Squad depth, in essence. If a similar injury crisis hits the Sabener Strasse, at least there are more replacements. In the long term, Ribery will likely be phased out by Costa as well. But that is probably well known.

A strange problem faced by Bayern last season was Lewandowski’s inhibition when playing alongside Ribery and Robben. But this will not be the case with Costa. Not only is Costa a brilliant dribbler, his delivery is excellent. Nearly perfect. Crossing from set pieces and open play are among Costa’s specialties. Showcased by the goal against Real Madrid, this partnership could blossom. If Lewandowski can hit 30 goals next season, and Costa can churn his lightning fast pinpoint crosses out in the latter stages of the Champions League, this signing will look like a bargain.

With the season starting and Bayern’s sporting project looking far stronger than it did a few months ago, it could be Bayern’s year. Vidal and Costa look to be the missing pieces finally restored to the Bayern puzzle.