A rare derby in which the final scoreline reflects the number of high profile defensive errors made by both sides. Manchester City played the better football up till Iheanacho’s goal, after which United forced them into an impressive rearguard effort to see out the game.

Jose Mourinho started Jesse Lingard and Henrikh Mkhitaryan out wide, as he looked to thwart Guardiola’s pre-match preparation, which would have assumed the presence of both Juan Mata and Anthony Martial on the wings. Otherwise, his side was unchanged. The first half was characterized by Manchester City’s domination of the ball. In particular, their ability to consistently rob United of the ball in transitions, then launch incisive attacks.

Guardiola is renown for reinventing possession football by employing an intense pressing game in defensive transitions. This ensures that his side regains the ball almost immediately. While Mourinho has come up against this before, Guardiola’s setup often prevails against even the best of counter-attacking teams, especially before tired legs set in during the first half. Even Atletico Madrid struggled to hit Bayern Munich on the break during the first half of their second leg in Munich.

While Atletico Madrid often attempted clearances to the halfway line in a bid to reorganize, if not counter, Manchester United tried to play the ball out from the back. Time and again, Manchester City (Fernandinho, especially) regained the ball from United’s midfielders, who were always caught when trying to receive passes. After the game, Mourinho spoke of how his team defied his instructions and played ‘first station balls’ when he specifically told them not to. A first station ball is a pass from the defense to midfield, and this is precisely where United struggled in attacking transitions. 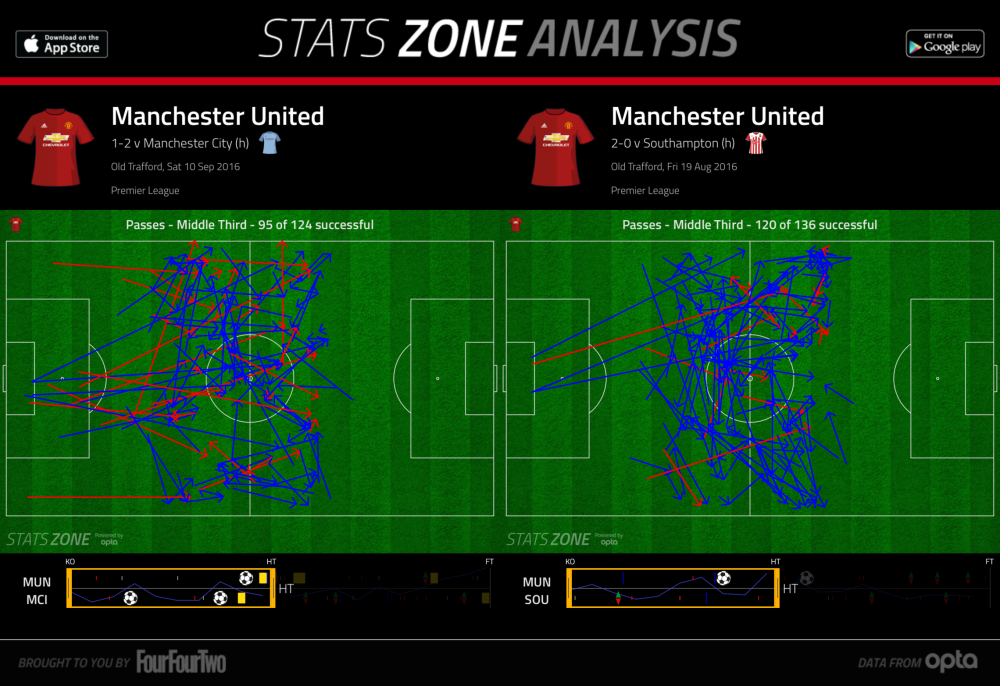 United’s passes from defense to midfield were intercepted very easily, enabling City to launch dangerous attacks as soon as they regained the ball.

Mourinho’s post match conference revealed that Jesse Lingard and Henrikh Mkhitaryan failed to carry out his tactical instructions, and struggled to contain their full backs. Precisely how this affected this game was interesting to watch.

Guardiola is known to have invented the ‘inverted full back’ at Bayern Munich. That is, the full back which tucks inside as a central midfielder when in possession, rather than sprinting down the touchline to overlap the winger. By moving into central midfield, the full back ensures that wingers who track them are not in wide areas to start counter attacks, and that their wingers (teammates) are in 1 on 1 situations against opposition full backs.

This tactical innovation was useful at Bayern Munich, but gave the German side little advantage against the strong 1 on 1 defenders of Atletico Madrid. In this case, Guardiola instructed only 1 of his full backs, Bacary Sagna, to play as an inverted full back. The other, Alexander Kolarov, functioned as an ordinary full back. 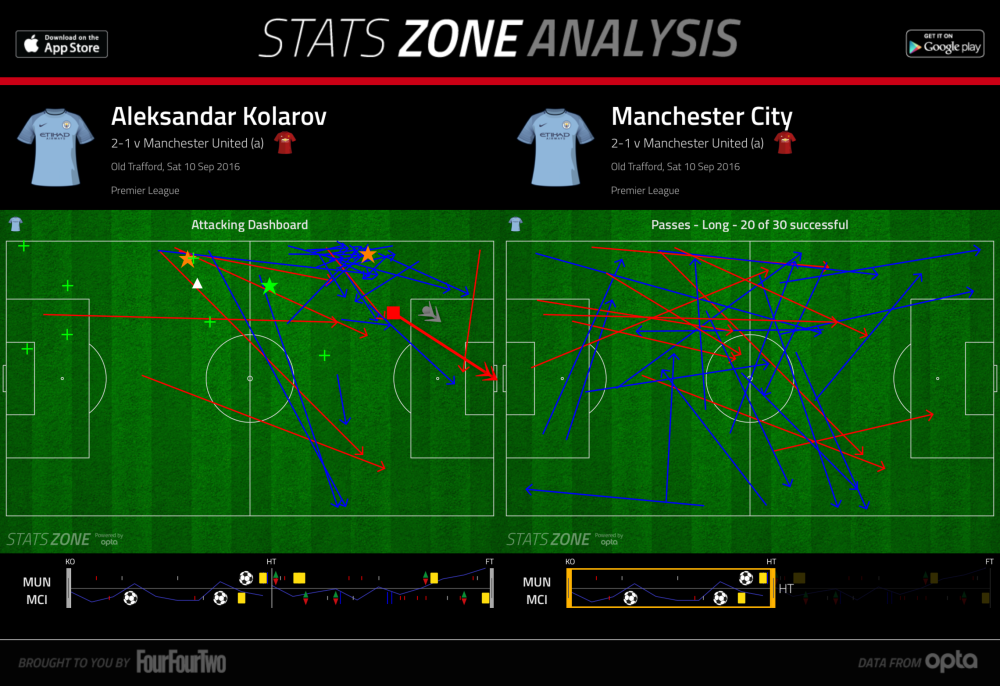 It’s hard to say exactly why Guardiola chose this, although Juan Mata’s potential presence, and his ability to thrive in the middle and hold the ball in transitions, might have forced his hand. Henrikh Mkhitaryan, however, put little pressure on Alexander Kolarov, and played right into the City boss’ plans. Kolarov was free to launch long balls, and often, like the rest of the Manchester City side, looked to pass it into the path of Raheem Sterling, who was running in behind Luke Shaw. Sterling was clearly given the license to take on Shaw, although he didn’t make the most of his opportunity, as Shaw left the game with his reputation mostly intact.

On the other side, Kolarov did end up overlapping Nolito multiple times, and was the recipient of some passes over the defense as well. Ultimately, the full backs and wingers added to City’s incisiveness, but did not make a major difference.

If there was one player on City’s team who made an individual difference, rather than as a beneficiary of the system, it was Kevin De Bruyne. The Belgian international was given the license to roam midfield, and he promptly responded with a goal and an assist, as well as a sustained second half performance- unlike many of his teammates.

De Bruyne’s running from deeper positions also contrasted the meandering of Paul Pogba. Mourinho told the Frenchman to attack without worrying about defensive transitions, unlike Didier Deschamps and the national team in which he was very restrained going forward. Pogba impressed with some brilliant dribbling and was often fouled, but against an offensive threat like City, he struggled to track back on time. Fellaini was often left with too much to do, and Pogba rarely tracked De Bruyne with any conviction. 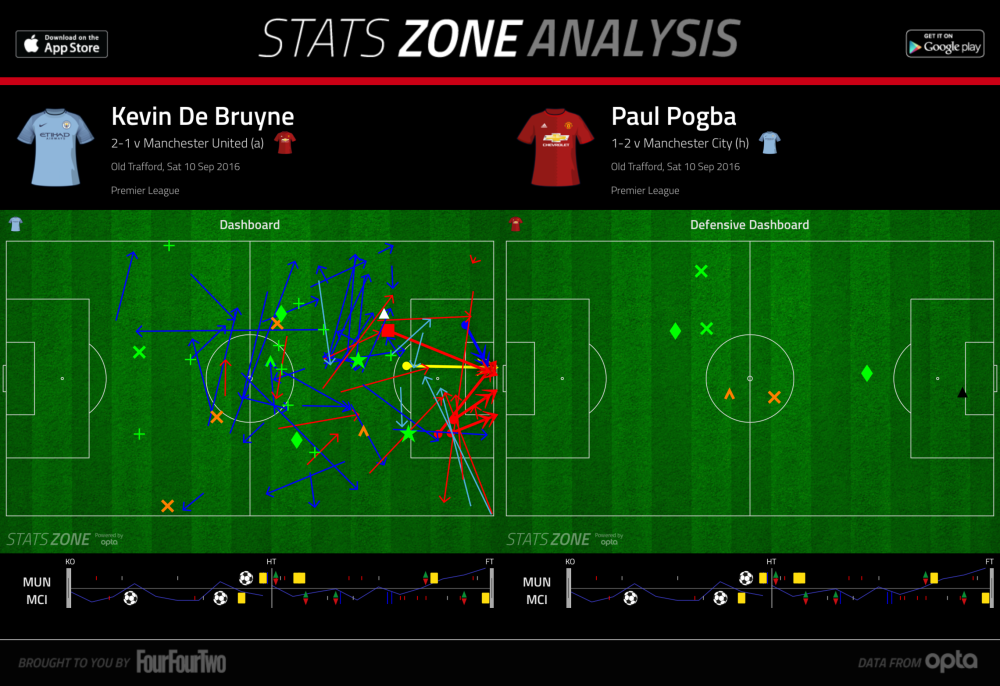 For all of City’s dominance and praise, it’s also worth noting that both their goals came off mistakes. Daley Blind switched off and failed to intercept the pass ahead of De Bruyne’s goal, and Kelechi Iheanacho was played onside by a stray defender.  United’s tactical and mental lethargy contributed to City’s dominance as much as they themselves did.

City Slow Down After Iheanacho Goal

The Iheanacho goal brought an almost subconscious switch off from Manchester City. At 2-0 up, they were cruising, but it’s remarkable how the intensity of their pressing game and speed in possession immediately dropped off. They also conceded 3 easy chances to Zlatan Ibrahimovic, and it’s remarkable how he only managed to score 1 goal before half time. Claudio Bravo was culpable for conceding United’s goal, and will need time to adapt to the Premier League.

If anything, United’s defensive errors and City’s lack of sustained intensity after their second goal showed that both Mourinho and Guardiola have their work cut out for them.

Mourinho reacted to United’s struggles in wide areas and playing the ball out of defense by bringing on Ander Herrera and Marcus Rashford.

Rashford slotted into Jesse Lingard’s position, and he was clearly designed to cause more problems for Bacary Sagna, who was playing quite centrally up till that point. Herrera’s introduction gave United newfound intensity in defense, and his willingness to follow tactical instructions ensured positional discipline that was not provided by Paul Pogba. Wayne Rooney then moved to the right, and Marouane Fellaini joined the attack in what was now a hybrid between a 4-2-3-1 and a 4-3-3.

United Look to Press Up the Field

If Mourinho was really feeling adventurous, he would have started the first half playing in this manner. United’s deficit meant that Portuguese had no choice but to play a high-pressing game. After witnessing Claudio Bravo’s struggles in the first half, Mourinho ordered his charges to play man to man marking for goal kicks, and this forced City into uncomfortable possession play within their half. 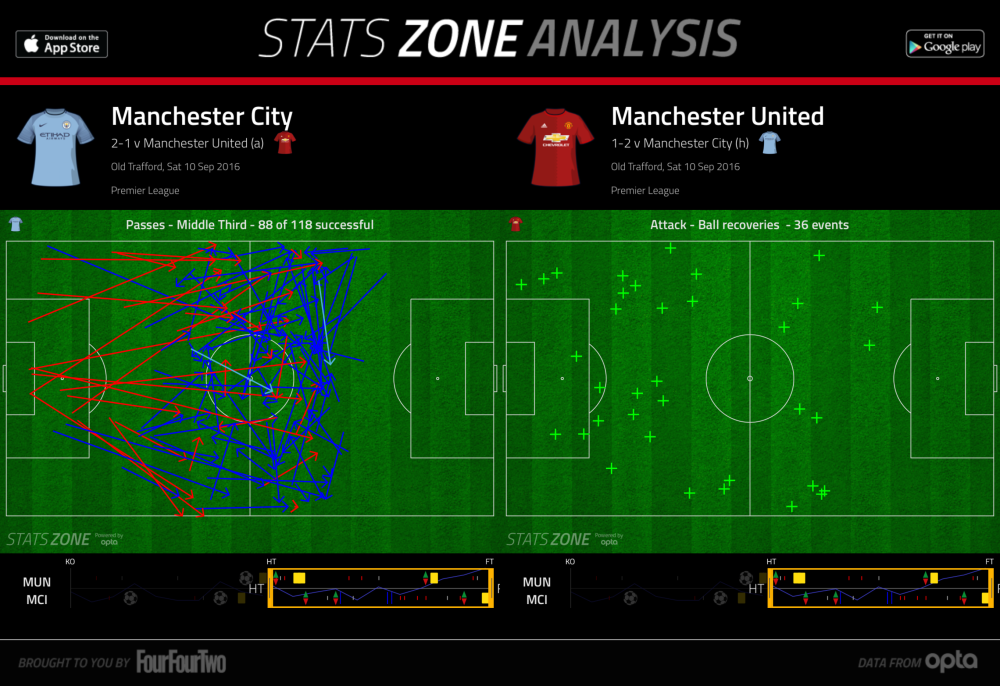 If United struggled to play the ball out from the back in the first half, City mirrored them in the second half. United launched wave after wave of attacks going forward, but after the Louis Van Gaal era, it’s of no surprise that they were far from as cohesive as Manchester City. Their main tactic involved launching balls into the box off the boot of Wayne Rooney.

There have been many matches in which Wayne Rooney has truly struggled to get involved in the game, but his critics cannot deny that he was at the center of United’s second half charge. Rooney was anointed corner taker, and also took deep free kicks in an attempt to utilize United’s aerial superiority. Ibrahimovic’s first goal was a product of a Rooney free kick. 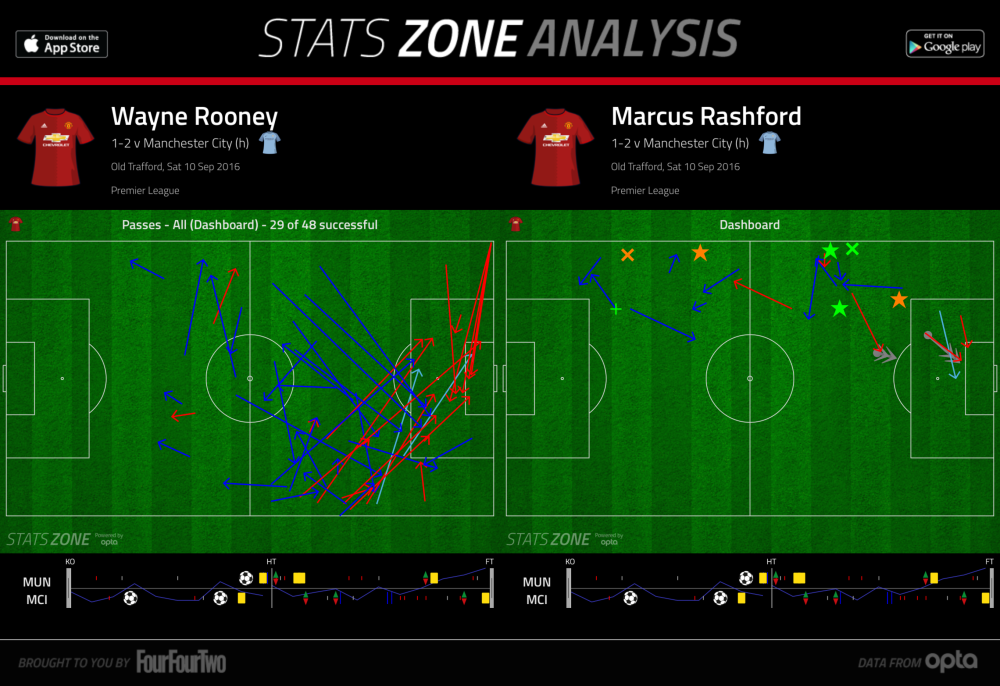 Of course, United’s approach was also part of the issue, as they were unable to create as many clear chances as Manchester City. Marcus Rashford produced a handful of thrilling runs, but as the match progressed, United increasingly resorted to long balls, which do not suit Rashford’s game. The young prospect was very impressive when he had the ball at his feet, however.

If there is something we can glean from this game, it’s that even Pep Guardiola has accepted his inability to fully impose his style on the Premier League. The Catalan has stamped his authority on City’s game with style so far, but it has been for small bursts, such as in the first half up till Iheanacho’s goal, rather than for entire games.

Guardiola craves control, but has adapted due to the frenetic pace of the Premier League, and his side’s lack of requisite intensity to dominate larger periods of games.

When Anthony Martial was introduced for Luke Shaw, and United moved to a permanent 3 at the back, Guardiola was panicking on the touchline. Mourinho had a side that was physically imposing, compared to City’s short team.

In response to United’s aerial barrage, he sent on Fernando (for Iheanacho) in midfield to help see out the game, and later brought on Pablo Zabaleta for (an injured) Kevin De Bruyne. City’s resilience in this situation was commendable- Zlatan Ibrahimovic’s best chance actually came before, rather than after half time, when he was unmarked and headed straight at Claudio Bravo.

Fernando for Iheanacho is a move one would associate with Guardiola- the addition of a midfielder over a forward to exert dominance in central areas. But Fernando didn’t change the tide of the game, rather he only compounded City’s rearguard effort. Guardiola also sent on Zabaleta and played with 5 at the back- which is highly uncharacteristic of the dogmatic Catalan, who would rather keep possession to see out the game. Ultimately his side survived United’s aerial barrage in a very impressive manner. But for a man who has only surrendered possession once in his entire career (in a league game with an injury plagued Bayern side against Borussia Dortmund), this was a display of flexibility.

A game which witnessed 3 defensive errors lead to goals, but it showed us that both managers are far short of implementing their ideas on the Manchester clubs.

Mourinho is, no doubt, slightly behind Guardiola in that sense, as his side failed to carry out his tactical instructions over the course of the game, and left City’s players with too much space. The Special One’s request for another defensive spearhead, who would play the role that John Terry did during his previous stint at Chelsea, is now well justified. United’s defensive mistakes were unusual for a Mourinho team, and his wide players failed to play with the industry he usually demands, although Mkhitaryan’s lack of match fitness exacerbated the matter. Lingard’s inexperience also showed, as he didn’t meet Mourinho’s demands before he was withdrawn at half time.

City are also far from a finished product, although their effort in the absence of both Gundogan and Aguero was commendable. Pep has quickly mounded his team into one with the hallmarks of a Guardiola team, but has been unable to garner enough intensity from his starting XIs. The intensity of the Premier League might dictate that he will never be able to build a team like Bayern or Barcelona, but surely they will control proceedings for longer than 40 minutes.

Claudio Bravo’s errors show that he will need a few matches to adapt to English football. Additionally, City’s wasteful counter attacks were uncharacteristic of Guardiola sides. Their sudden sluggishness after Iheanacho’s goal also shows that they will have to remove their complacency, which was common during the Manuel Pellegrini era.

The next derby, in all likelihood, will be far different, and potentially less entertaining. City will definitely dominate possession for larger stretches of the game, and United will be far more difficult to break down. Expect more lethal counter attacks, sustained possession football, and fewer errors.