A game full of subplots, but Cristiano Ronaldo ended the game as a contest with a 3 minute burst in the second half.

Wales lined up in a 3-5-2/5-3-2. Andy King and James Collins started in place of Aaron Ramsey and Ben Davies.

Neither side looked to press at the start, often giving center backs time on the ball. Considering that Wales were missing their second most important player, Aaron Ramsey, and that Portugal have played like this throughout Euro 2016, the stage was set for another cagey game.

Portugal never looked to press the Welsh center backs, giving them time and space on the ball. While Wales were relatively adventurous, holding a slightly higher line, they never looked to constrict Portugal in their own half. The absence of Aaron Ramsey meant that their transitions were not very smooth as well.

With the defensive nature of the game set in stone, it was interesting to look at the contrasting roles of the superstars on both teams, as they looked to break open the game. This match was by no means all about the two Real Madrid wingers, but their roles and performances ultimately highlighted the difference between the two sides.

The younger of the stars, Gareth Bale, 27, dominated Wales’ play in a manner in which even Ronaldo, at his physical peak, would have struggled to replicate. Bale dropped deep into midfield, made runs out wide, crossed balls into the box, and dribbled whenever he had the chance, particularly once his team was down by 2 goals in the second half.

Bale’s passing chart shows that his role was not of an out and out attacker, but of a player who would roam drop deep to start attacking moves. He was extremely involved in build-up, and worked hard in defense as well.

In many ways, Bale’s role, and style, was closer to something one would expect from Lionel Messi, not Cristiano Ronaldo, at the international level, if he was surrounded by a less talented squad. Recently, Messi has shown signs of retreating into midfield, as a playmaker, and one would imagine that he would play like Bale did today, spraying passes around midfield and occasionally surging forward.

While Bale might have controlled the tempo of the game, Ronaldo essentially decided the result despite being far less influential. Now 31, the Portuguese rarely dribbles with the ball at his feet, but he remains one of, if not the most efficient goal-scorers of this generation. He also retains great fitness; Ronaldo was even seen tracking back deep into his own half to defend. Ronaldo rarely attempted long passes, he was looking for quick one-twos in tight spaces, as he was always surrounded by many players. While Cristiano’s lack of influence meant that he couldn’t ascertain the creation of chances, it also ensured that he was playing closer to the Wales goal, and was always more likely to decide the game. When his chance finally came, he buried it, and he could rely on a strong midfield to see the game out.

If the contest was to be won by the better team, Wales would’ve won. They were more cohesive on the ball and had a well-defined style of play. Even their set-pieces were better rehearsed, but the loss of Ramsey and Portugal’s frustrating style of play limited their chance creation.

Two major trends showcased Wales’ limitations. The first was their fouling of Cristiano Ronaldo. Ronaldo was subject to rough treatment whenever he received the ball, and Wales were fortunate to avoid conceding a penalty early in the game for one such foul. Wales could never prevent Ronaldo from leaving his mark on the game.

In truth, center back James Collins never looked comfortable marking Ronaldo in the air, and when the goal eventually came, it was when Ronaldo was left alone to challenge a single Welsh player for the cross.

This was after Ronaldo won another duel against Collins in the first half, and that was when he nearly scored. When Collins did win aerial duels, it was when he used the dark arts. 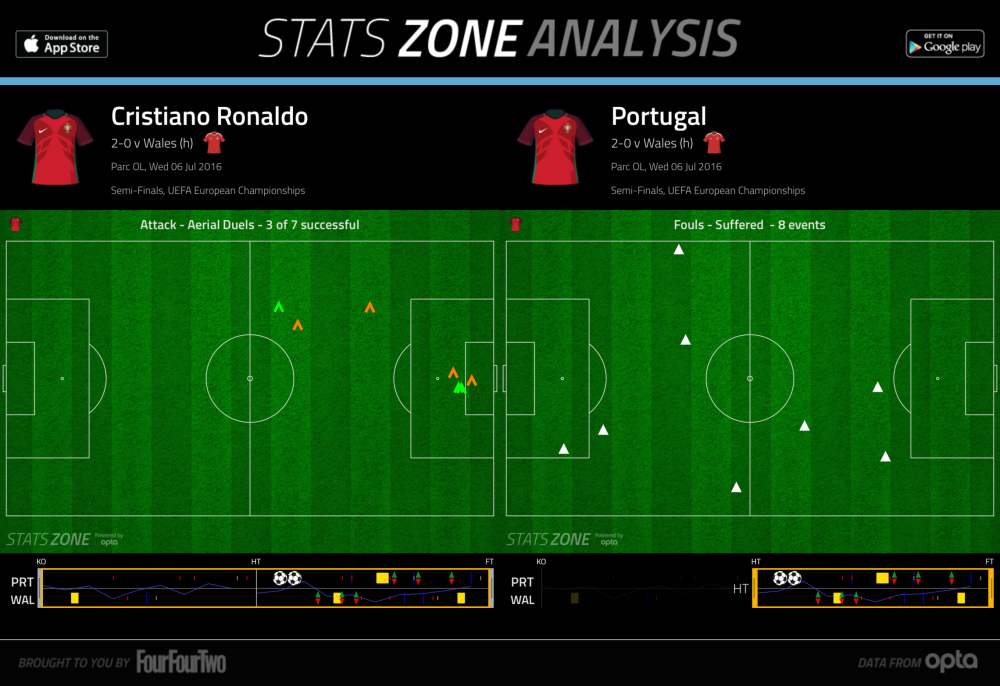 In the end, Ronaldo himself had the aerial prowess to score, while Wales’ well versed set-pieces came up short.

The second major illustration of Wales’ limitations could be seen when Chris Coleman called on League One substitutes when chasing the game. As successful as they have been as a team, they lacked the quality to break down Portugal, who themselves put in impressive defensive performances against Croatia and Poland.

Wales’ lack of talent meant that Bale always had to play in a deep role to maximize this side’s output. With Ramsey around to exploit spaces, Wales could afford to play Bale deep. But with no Ramsey, Bale was left with too much responsibility, and couldn’t be decisive like Ronaldo, as he was too far from the Portuguese goal. 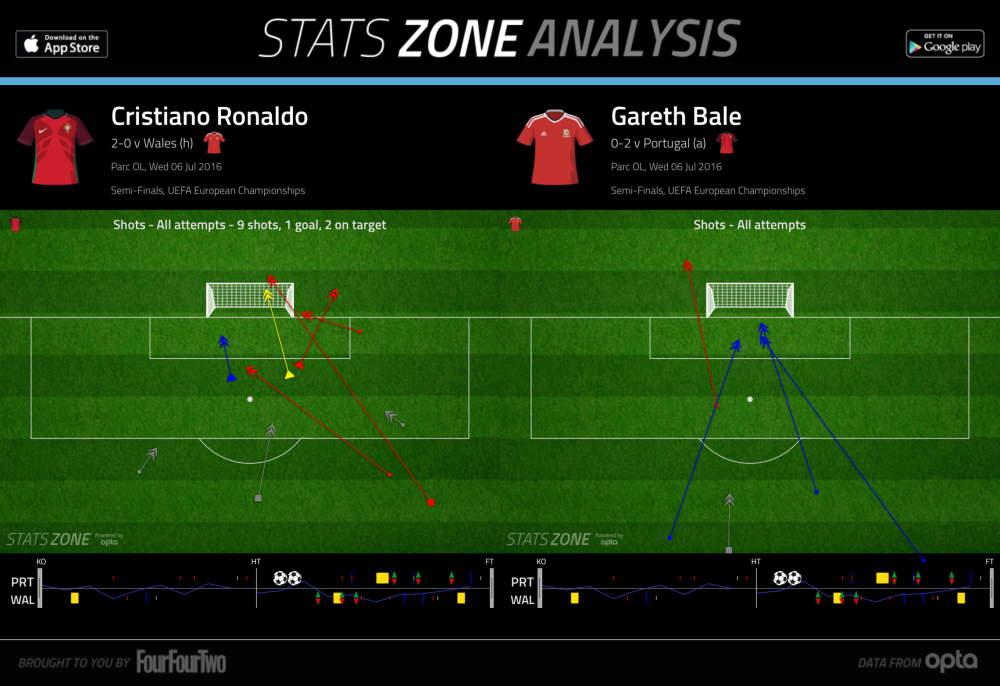 There was little in the way of tactics in this game, other than tactical fouling, but it provided an interesting insight into the strengths and weaknesses of the styles of Ronaldo, Bale, Portugal, Wales and even Lionel Messi.

Wales proved to be a great collective, and their run to this stage of the tournament should be taken as a lesson on maximizing the output of a superstar like Bale. But in knockout football, sometimes its individual moments and strong defenses that outclass team efforts. Bale, for all his influence, was playing too deep to truly decide the game.

In contrast, Portugal have made the final despite lacking any form of cohesiveness. But they retain the greatest goalscorer of this generation, and that itself could propel them to a win in the final.

Ultimately, the game seems to confirm Sir Alex Ferguson’s argument that Ronaldo could score a hat trick for sides such as Millwall, which is what makes him special. Indeed, his endurance and ability to jump came to the front today as his side beat Wales.

It is these all round qualities, and Fernando Santos’ strong defensive tactics behind him, which ensure that his side has progressed further than all but one team.