Hey guys, Chief Siddharth here. The new format for April 2015 is finally here, and now it’s time to rank our scores of archetypes. This post is practically ‘part 2’ of my original prediction. A lot of the rankings have been based off the assumptions and facts stated in the previous post. If you haven’t read it click here. If not, there are some more factors that I’ve taken into account for this tier list.L

Remember, this list is my opinion and is based off previous YCS and Regional tops, ARG results, the new ban list, certain comparable trends in the OCG and common opinion. Other than pure mechanics, the tier list takes usage and popularity into account. If you have a valid reason to change the position of a deck within 2-3 weeks of the time of writing, changes will be implemented. Hope you enjoy the large compilation of archetypes. Without further ado, here is the list:

The Tier Rankings are at version 3.0, updated after ARG Detroit. 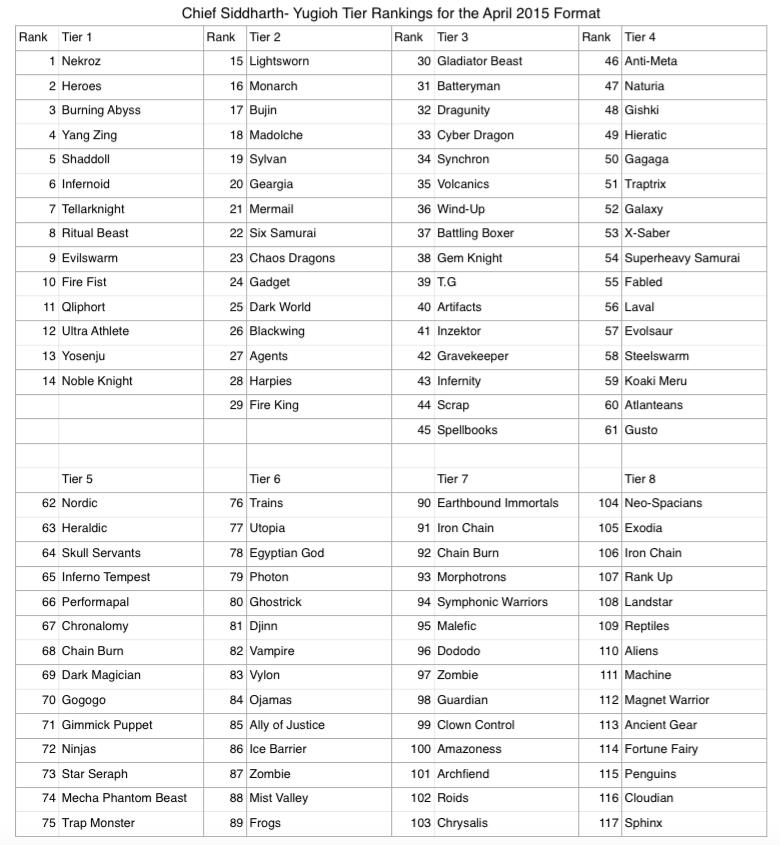 For those sithering in anger after seeing the list: comment with your major complaints, then take the rest with a pinch of salt. Opinion varies from person to person, and frankly there is no correct tier list. Even the wikia, which carries the knowledge of the Yugiworld, had to remove the tier rankings due to controversy. My list is an attempt to generalize things, not set the tone.

Some observations you must’ve made are explained:

Hopefully this tier ranking makes you realize how many archetypes there are in Yugioh. I mentioned less than half. It also should give you an idea of which deck(s) you should build, and which decks you shouldn’t build.

This also acts as a tribute to my favorite Yugiblogger, Yugiold. His rankings were among the last few complete lists, with no other lists meriting any complements for effort. Yugiold’s retirement left a void which I hope to fill… although that will never happen in it’s truest sense.

That’s it for this post guys, hope you enjoyed.