A dominant performance by Italy, who, led by the coach of the tournament, ousted the defending champions.

Italy started with an expected 3-5-2.

Spain lined up in a 4-3-3, with the starting lineup unchanged after the first 3 games.

Conte utilized his players’ commitment to great effect, and chose to essentially man mark Spain- all over the pitch.

The 3-5-2 itself naturally neutralizes the 4-3-3; strikers mark center backs, wing-backs mark full backs, central midfielders mark central midfielders, and the back 3 mark the front 3. Conte had a back 3 of Chiellini, Barzagli and Bonucci, who successfully marked Morata, Nolito and Silva, while the midfield trio stuck with Iniesta, Fabregas and Busquets.  The rest followed suite.

The fact that Iniesta and Fabregas often drifted wide or long meant that they had little say in buildup, while Sergio Busquets was well man-marked by Daniele de Rossi. Italy’s bold organization ensured that David De Gea had no choice but to clear the ball during goal kicks, instead of playing it short. After all, his entire team was being man-marked.

Spain also lacked an aerial presence, with Alvaro Morata struggling to regain the ball against a formidable defensive lineup. When the ball went out for a goal kick, it often resulted in a long pass, following which Italy regained the ball and countered with speed. Morata struggled to hold up the ball, while Nolito and Silva were irrelevant in aerial duels.

Del Bosque’s first change was, naturally, bringing on a target man in Aritz Aduriz. The Athletic Bilbao man presented a threat in the air, but his match was cut short after he picked up a knock. Del Bosque sending on Aduriz, however, illustrated his submission to Italy’s dominance. By sending on a target man, he accepted that Spain would have to contend with De Gea’s long balls, and would adapt instead of looking to impose their game with more intensity.

Indeed the second half saw some improvement from Spain, but far from enough to beat Buffon. The defending champions, somewhat uncharacteristically, resorted to crosses and speculative efforts, with very few attempts at buildup. Its worth mentioning that Spain aren’t used to being in this situation; they hadn’t conceded in the knockout round of tournaments for years.

When Spain’s buildup did improve, it was because Italy tired, and because Sergio Busquets dropped deep. Daniele De Rossi was fairly fatigued after half time, and his replacement Thiago Motta is not the most mobile player, although he was successful in the midfield battle. Busquets himself has dropped deep, often between his center backs, at Barcelona- most notably when he was being marked by Atletico Madrid. In this case, the Spaniard waited until half-time before adjusting his position. 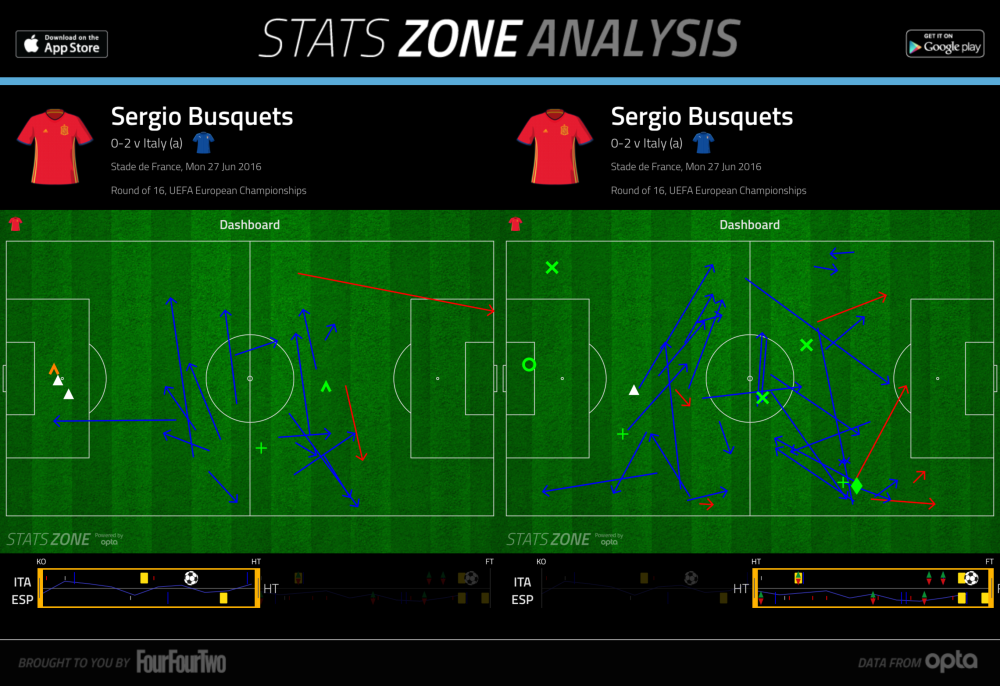 Spain also waited until half time to begin pressing at goal kicks and higher up the field as well, as they’re often used to dominating through ball retention, rather than pressing.

After the game, the future Chelsea manager said that the only way Italy would win the European Championship was by playing like a club side. Considering Italy’s lack of attacking talent, Conte was correct.

Club sides are often well drilled, and players usually have a good understanding of attacking movements. National sides, on the other hand, are markedly slower in possession, and play more defensive games, relying on their attacking stars to score.

With no true star in attack, so to speak, Conte has clearly spent time working on offensive moves with his players. They demonstrated remarkable cohesion and chemistry, especially for a national side.

The wing-backs were crucial to Conte’s plan, as they pinned Spain’s full backs back and helped start counter-attacks. Furthermore, Italy’s midfielders drifted wide to offer support as well, often stretching Spain and creating spaces in the middle of the park. Eder would then drop short and collect the ball in that space, often leading to extremely cohesive counterattacks.

While their first goal ultimately came after a De Gea error, and the second goal was in the dying moments of the game, it was clear that Italy were the sharper, faster side.

Its true that Spain created more chances in the second half than the first, but they were also extremely speculative in their attempts, abandoning the conservative possession game that has served them so well in favor of a more risky approach. 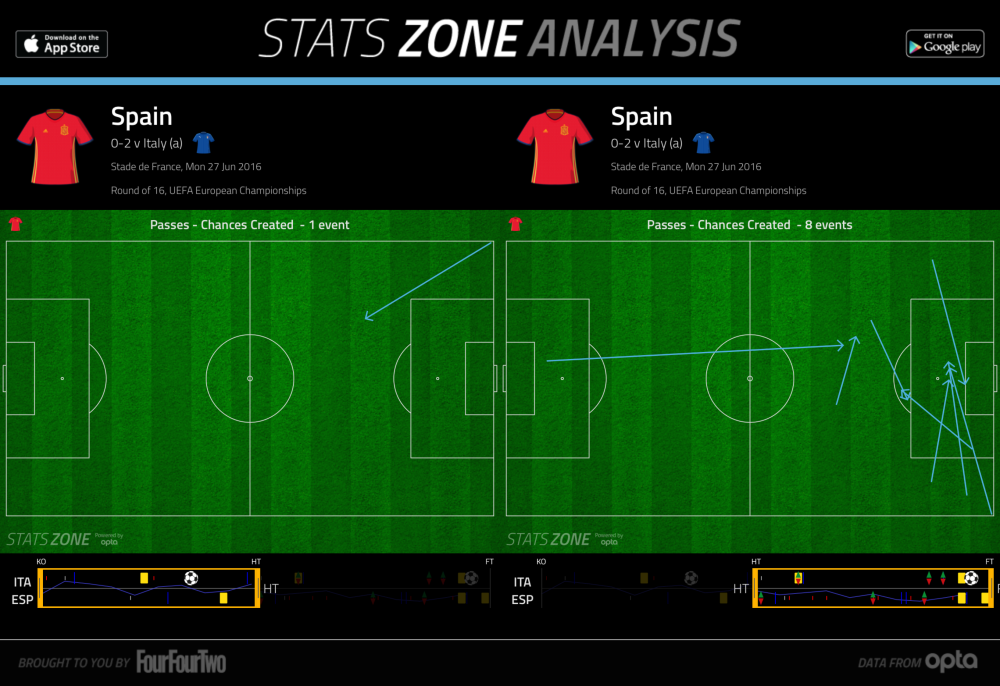 Ultimately, the chances Spain created were also a result of Italy’s fatigue, rather than they’re creativity. The Italians were not as sharp in defense after the hour mark, likely due to their energetic pressing.

The younger, versatile Antonio Conte drew on Louis Van Gaal’s tactics from the 2014 World Cup, as Italy cruised to a win by utilizing the 3-5-2. Not only were Italy impressive from a physical standpoint, but their formation ensured that tactically, Spain were unable to gain an edge.

Gerard Pique declared this as the end of an era, and that Spain will have to adapt their style to be successful in the future. Its largely true, top national sides no longer struggle to defend against Spanish possession. Although this was true in 2010 as well, when Inter Milan won the Champions League, Spain don’t effectively apply possession as a defensive tactic.

As for Italy, their subsequent defeat to Germany showcased that they too can be neutralized, as with Joachim Loew’s 3-5-2, but also showed that with a more talented side and the same coach, they could have won the game. For now, however, Germany remain the best team in the world, with a specialist national team coach and a physically and technically talented side.